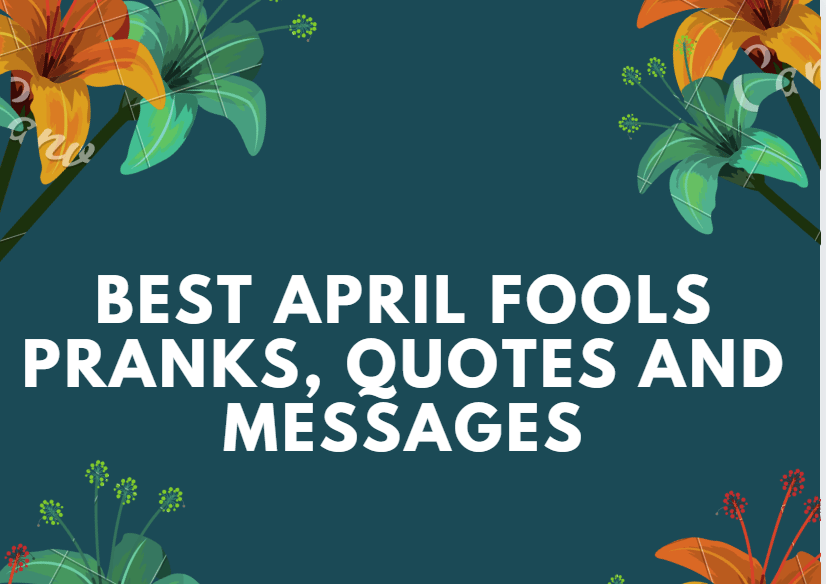 April Fool is someone who falls victim of a hoax or trick on the 1st of April. The day is the annual celebration for hoaxes and practical jokes. Despite not being a public holiday, it has been celebrated since the 19th century.

The perpetrator of this jokes or tricks usually shouts ‘April fool’ to the recipient who is a victim of the joke. Back in the days, this pranks or jokes are usually carried out physically, but we now live in a world of the internet and social media. You can make a joke to your friends or family by sending them April Fool messages on that day. We’ll be looking at best April fools pranks, quoted and messages.

• You’re really smart to wait until after midnight to tell me you love me.

• Forgive, O Lord, my little jokes on Thee, And I’ll forgive Thy great big one on me.

• I’ll better wait for tomorrow to tell you I’m pregnant to avoid confusion in your mind.

• You should know, that no one understood it was an April fool’s joke because no one expected you have a sense of humour.

• April fool’s pregnancy prank would not have succeeded if it wasn’t for your reckless promiscuity.

• I’m sorry you had to leave thanks to my April Fool’s Day joke.

• I wish your workday won’t be as boring as a multi-billion dollar company’s April Fool’s Day prank.

• Making you believe you’re the father was the best prank I could have dreamed up.

• Unemployment gives me plenty of time to make some cunning April Fool’s pranks on the people who made me unemployed.

• This year I had problems with any good pranks, so I sent your whole family a photo of my balls.

• I believe you still think it’s March, so I am sure you won’t pull any April Fool’s Day pranks on me.”

• What a fool does in the end, the wise do in the beginning.

• Art is magic delivered from the lie of being the truth.

• Mix a little foolishness with your prudence: It’s good to be silly at the right moment.

• Art is not a study of positive reality, it is the seeking for ideal truth.

• He who is born a fool is never cured.

• I sometimes wonder if the manufacturers of foolproof items keep a fool or two on their payroll to test things.

• Everything is funny as long as it is happening to somebody else.

Happy Ramadan Kareem: Happy Messages to Send to Your Loved…

Happy 420 Day: Meaning and what you need to know

100 Happy Easter Messages to Send to Loved Ones

• The trouble with practical jokes is that very often they get elected.

• It is the ability to take a joke, not make one, that proves you have a sense of humour.

• Here cometh April again, and as far as I can see the world hath more fools in it than ever.

• A man always blames the woman who fools him. In the same way, he blames the door he walks into in the dark.

• If every fool wore a crown, we should all be kings.

• The aim of a joke is not to degrade the human being, but to remind him that he is already degraded.

• The haste of a fool is the slowest thing in the world.

• A fool sees not the same tree that a wise man sees.

• A fool may be known by six things: anger without cause; speech without profit; change without progress; inquiry without an object; putting trust in a stranger and mistaking foes for friends.

• A word to the wise ain’t necessary-it’s the stupid ones that need the advice.

• If we would have sex tonight I’d be happy with you telling everyone it was just an April fool’s joke.

• You should know that on April Fool’s Day my natural mistrust of others will go up to a level nearly the psychosis.

• Anything you say I won’t take it seriously and it doesn’t matter we talk today or any other day of the year.

• I noticed your unhealthy lifestyle what makes the cardiac arrest a possible outcome from an April fool’s joke.

• It’s interesting if changing your Facebook relationship status as an April fool’s joke would be the end of your relationship.

• The first of April, some do say, Is set apart for All Fool’s Day; But why the people call it so, Nor I, nor they themselves, do know, But on this day are people sent, On purpose for pure merriment.

• I am so clever that sometimes I don’t understand a single word of what I am saying.

• So, rather than appear foolish afterwards, I renounce seeming clever now.

• It’s not my fault I haven’t wished you a happy birthday. I wasn’t sure that Facebook was not making an April fool’s joke on me.

Happy Ramadan Kareem: Happy Messages to Send to Your Loved Ones

Happy 420 Day: Meaning and what you need to know

100 Happy Easter Messages to Send to Loved Ones